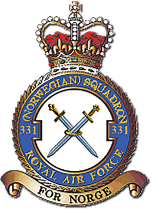 During the German occupation of Norway our King Haakon and his Government escaped to England. In addition a lot of personnel from HÃ¦rens FlyvÃ¥pen (Army Air Force) and Marinens FlyvÃ¥pen (the Navy Air Force) escaped to England, after first trying to defend Norway with obsolete equipment, and being outnumbered. Luckily, most of Norway’s Merchant Navy avoided falling under German control and more than 1000 ships (a tonnage of more than 4 mill. tons) could now sail for Great Britain and her Allies. Income for the Merchant Navy made it possible for the Norwegian Government to build up an Air Force abroad. For the years to come, Norwegians already abroad, or those escaping from occupied Norway, ensured a constant supply of flight and ground personnel. On the 21st of July 1941 No.331 (Norwegian) Squadron was formed at Catterick in Yorkshire. Operationally it was under the control of the RAF. The RAF unit code was FN, and legend has it that this stands for “First Norwegian”. That, however, has never been officially acknowledged. The Squadron’s first aircraft were former Battle of Britain Hurricane Mk.I’s which were later exchanged for Mk.II’s. After a brief stay at Castletown, Scotland, the Squadron moved north to Skeabrae, Orkney Islands. Their task was to defend the Home Fleet at Scape Flow. It was not until early 1942 that 331 even sighted enemy aircraft, and these high flying Fw Condors it was not possible to engage. The Squadron’s first Commanding Officer was Squadron Leader A.N. Cole, shortly followed by the Norwegian Major Odd Bull, thereafter a succession of other Norwegians and one Dane. But we are forgetting the Spitfires! From November 1941 the Squadron received Spitfire Mk.IIA’s. These had already seen use at other squadrons, and the mechanics complained that their technical standard was not good.A winter at Skeabrae, with a detachement at Sumburgh, gave no action against the enemy and the pilots felt left outside of the war. Rough weather was now their greatest challenge always flying out over the sea usually with reduced visibility and often in darkness. However, this period gave them valuable training, as a squadron, and with the Spitfire. In March 1942 the Squadron received factory new Spitfire Mk.Vb’s and, a month later, orders to transfer south, very popular news! On the 4th of May the whole Squadron flew south to North Weald north-east of London, a place that became the home of Norwegian Fighter Squadrons for two years. On the 14th of May a “Rhubarb” (attack on ground targets of opportunity) produced two locomotives destroyed and barges damaged. These were the Squadrons first scores against the enemy. Three days later 331 flew its first “Ramrod” (bomber erscort). On the 19th the Squadron encountered a force of Fw 190’s probably destroying one and damaging another. 331 was now really in “the heat of the action”. In June 1942 332 (Norw.) Squadron also moved to North Weald. Later, the two Squadrons became the main elements in No. 132 (Norwegian) Wing. In August 331 moved to Manston for the Dieppe Raid. The cost of taking part in the raid was three Spitfires lost, but no casualties. The Squadron claimed eight enemy aircaft destroyed. Back to North Weald for more “Ramrods” and “Sweeps” (an offensive formation over enemy territory to draw the enemy). In october 331 received new Spitfire Mk.IX’s while a few Mk.VB’s were still according to log cards kept until summer of 1943. Operations were maintained during the winter, but on a reduced scale as dictated by the weather. 1943 brought an increasing accent on escorting RAF and American bomber formations on daylight raids across the channel. Also pure fighter sweeps over enemy territory, called “Rodeo”, added to the Squadrons score. In 1943 the Squadron was the highest scoring in the 11th Group and also in the whole Fighter Command. The score was 68 enemy aircraft destroyed. In January 1944 the Squadron was transferred to Wales for gunnery training. In reality this was also a rest period. On returning to North Weald 331 received new Spitfire Mk.IXE’s (the IXE had two .50 machine guns in place of the four .303 guns). In March both 331 and 332 moved to Bognor Regis in preparation for D-Day. The Squadron now received more practise in dive bombing, the number of air to ground attack missions would now increase. On D-Day the 6th of June both 331 and 332 patrolled over Normandy to protect troops against a non-appearing Luftwaffe. On the 22nd of June the Squadron moved to Tangmere, then very short stops at Funtington and Ford, before transfer to B 16 (a provisional airfield near the frontline) near Caen, Normandy. The automn of 1944 and the winter of 44/45 saw the Squadron move several times, so as to follow the Front that moved eastwards. Attacks were mostly on rail and road targets, also barges. Also attacks against specified targets. Few dogfights, flak caused most casualties. A brief spell against Fw 190’s and Bf 109’s on the 29th of December resulted in 16 Germans destroyed, losses 4 Spitfires and one pilot. The last operation against the enemy was on the 21st of April 1945, and involved escorting Mitchells to Oldenburg. The Squadron base was now Twente, in Holland, near the German border. 331 left its Spitfires behind at Twente and moved by surface trans port to North Weald, where they received newly overhauled Spitfire Mk.IXE’s. On the 12th of May 331 left North Weald to fly home to Norway.